Eight months pregnant, Madeline Matheson deflects her demanding mother-in-law’s insistent pressure for standard hospital treatment, instead opting for the peaceful companionship of a trusted midwife. Though reluctantly compliant, her husband remains supportive of her choices until a sudden tragic accident leaves her unborn baby lifeless inside of her. Madeline remains determined to carry the stillborn baby to term, where she miraculously wills the delivered corpse into life. But it is not too long before the increasingly isolated mother realizes that something is not right with baby Grace, and she must make horrible sacrifices to keep her living. (Source)

After years of trying to conceive, Madeline and Michael Matheson are finally pregnant. But with only weeks before delivery, an accident leaves both Michael and the unborn child dead. Devastated, Madeline determines to carry the child to term and deliver naturally. What seemed like madness becomes a miracle when, after delivering a stillborn child, Madeline finds her baby is indeed alive… and hungry. She soon discovers that her baby – now named Grace – thirsts for something more than mother’s milk, and Madeline is determined to feed her, no matter the consequences. With nowhere to turn, Madeline must make a mother’s ultimate decision: What will she sacrifice to keep her child alive? (Source)

It is the near future. Astronaut Sam Bell is living on the far side of the moon, completing a three-year contract with Lunar Industries to mine Earth’s primary source of energy, Helium-3. It is a lonely job, made harder by a broken satellite that allows no live communications home. Taped messages are all Sam can send and receive. Thankfully, his time on the moon is nearly over, and Sam will be reunited with his wife, Tess, and their three-year-old daughter, Eve, in only a few short weeks. Finally, he will leave the isolation of “Sarang,” the moon base that has been his home for so long, and he will finally have someone to talk to beyond “Gerty,” the base’s well-intentioned, but rather uncomplicated computer. Suddenly, Sam’s health starts to deteriorate. Painful headaches, hallucinations and a lack of focus lead to an almost fatal accident on a routine drive on the moon in a lunar rover. While recuperating back at the base (with no memory of how he got there), Sam meets a younger, angrier version of himself, who claims to be there to fulfill the same three year contract Sam started all those years ago. Confined with what appears to be a clone of his earlier self, and with a “support crew” on its way to help put the base back into productive order, Sam is fighting the clock to discover what’s going on and where he fits into company plans. (Source) 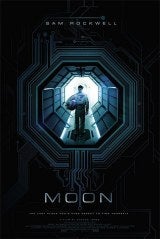 Moon is a refreshingly philosophical and ultimately touching indie reflection on a genre that too often loses sight of character and story amid the wizardry of its special effects; told in the classic filmmaking tradition of 2001: A Space Odyssey. Set in the near future, Moon stars Sam Rockwell (Frost/Nixon, Confessions of a Dangerous Mind) as Sam Bell, an astronaut assigned by Lunar Industries to a three-year mission mining Helium 3 on the moon, the earth’s new energy source. As his contract comes to an end and Sam’s health starts to deteriorate, painful headaches, hallucinations and a lack of focus lead to an almost fatal accident. While recuperating, Sam meets a younger, angrier version of himself, who claims to be there to fulfill the same three- year contract Sam started all those years ago. The directorial feature debut from Duncan Jones, Moon also includes the voice of Kevin Spacey (21, American Beauty) as “Gerty,” the lunar base’s mysterious robot, whose mission is to keep Sam Bell occupied and on task. Moon is produced by Stuart Fenegan (Liberty Films) and Trudie Styler (Xingu Films) and written by Nathan Parker from a story by Duncan Jones. (Source)