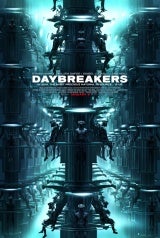 The year is 2019. A mysterious plague has swept over the earth, transforming the majority of the world’s population into vampires. Humans are now an endangered, second-class species – forced into hiding as they are hunted and farmed for vampire consumption to the brink of extinction. It’s all up to Edward Dalton, a vampire researcher who refuses to feed on human blood, to perfect a blood substitute that might sustain vampires and spare the few remaining humans. But time and hope are running out – until Ed meets Audrey, a human survivor who leads him to a startling medical breakthrough. Armed with knowledge that both humans and vampires will kill for, Ed must battle his own kind in a deadly struggle that will decide the fate of the human race. (Source)