SLEEP DEALER is our tomorrow today, a corporation-controlled, militarized near future where the United States has successfully closed its borders. Finally. Through American technology we have developed a capacity, a digital network, to have all the work with none of the workers constructing our buildings, picking our fruit, manning our planes. There are no water shortages. (Source) 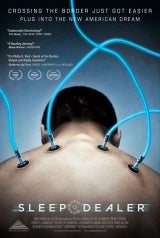 SLEEP DEALER is our tomorrow today, a corporation-controlled, militarized near future where the United States has successfully closed its borders. Finally. Through American technology we have developed a capacity, a digital network, to have all the work with none of the workers constructing our buildings, picking our fruit, manning our planes. There are no water shortages. Memo Cruz (Luis Fernando Peña) lives with his parents and his brother in the small, dusty village of Santa Ana del Rio, in Mexico. Santa Ana is an isolated farming community, the kind of place that seems frozen in time — except for the hi-tech, militarized dam that was built by a corporation, and now controls Santa Ana’s water supply. Memo couldn’t care less about Santa Ana. He loves technology, and dreams of leaving his small pueblo and finding work in the hi-tech factories in the big cities in the north. But for now, Memo is trapped in Santa Ana del Rio. One night, while using his homemade radio, Memo stumbles across something he’s never heard before – the communications of the security forces that are constantly patrolling the area around his village, to protect the dam from ‘Aqua-Terrorists.’ Unknown to him, or his family, Memo is now under the crosshairs. Security agents at the water company’s headquarters in the United States, have spotted Memo’s radio intercept, and conclude that it’s a threat. Memo is then forced to realize his dream of leaving Santa Ana in the worst possible way when his homemade radio – and his house – are destroyed in a reckless remote-control bombing. Driven by feelings of guilt, and a need to earn money, Memo leaves his family and his pueblo to go north, find work, and help his family start again. He heads to the massive border city of Tijuana. On the way, Memo meets a young woman, sharp and beautiful, named Luz (Leonor Varela). Luz is an aspiring journalist who dreams of writing a story that might one day change the world. She’s curious about Memo, and she asks him a few questions as they approach Tijuana. As Memo arrives to Tijuana, “City of the Future,” we follow Luz. Alone in her apartment, Luz connects herself to the net, via implanted nodes in her body, and speaks. As she describes her day, the computer records visuals from her memories and the sound of her voice. She puts these recorded memories up for sale on the net — a blog, straight from the brain. The next day, to Luz’s surprise, someone, somewhere out there has bought her memory – and has paid in advance for more. A strange and complex relationship is set in motion between Memo and Luz. She wants to learn more about him, to sell more memories to her anonymous client. But he is cautious about revealing the real reasons he’s come to Tijuana. All Memo cares about is getting work that pays – and to do it he needs to connect to the network too – he needs nodes. When the identity of Luz’s reader is revealed, a chain of events is set in motion that will connect three strangers, and change their lives — maybe even change the world — forever. (Source)