Child murderer. Dream demon. The bastard son of a hundred maniacs. Any way you slice it, there can only be one man, one monster, who epitomizes those words:

For decades, Freddy has slashed his way through the dreams of countless youngsters, scaring up over half a billion dollars at the box office across eight terrifying, spectacular films. What’s more, it has become evident that Freddy may never rest in peace.

In this thrilling retrospective, fans will enter the world of Freddy Krueger and A Nightmare On Elm Street like never before: exploring what spurred mastermind Wes Craven to craft the first groundbreaking film; delving deep behind the scenes of the original and all of its sequels; learning how the cast and crew brought their worst nightmares to life; and finally, understanding the impact the series and its mythos have had on modern pop culture and the horror genre.

Narrated by and starring Heather Langenkamp, featuring interviews with the cast and crew spanning every film, and loaded with clips, photographs, storyboards, conceptual art, publicity materials, archival documents and behind-the-scenes footage, Never Sleep Again: The Elm Street Legacy is the definitive account of what many have called the best, most frightening and imaginative horror franchise in motion picture history. (Source)

Thanks to NokkiiA for sharing this. 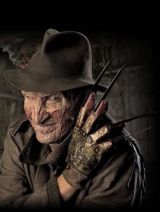 A group of teenagers are terrorized by “Freddy Krueger”, an evil being from another world who gets to his victims by entering their dreams and killing them with gloves that have knife blades attached to each finger. (Source)

After witnessing the brutal murder of his family, Jack Brooks (Trevor Matthews) is left with an unquenchable fury that he is constantly fighting to control. Now working as a local plumber and struggling in a relationship with his girlfriend Eve (Rachel Skarsten), Jack’s life has become a downward spiral. One night, Jack attempts to fix Professor Crowley’s (Robert Englund) old, rusted pipes, but unknowingly awakens an ancient evil. Lured by this demonic power, Professor Crowley discovers a monstrous black heart that quickly forces its way inside of him. Possessed by the heart now beating in his chest, the Professor starts a slow, gruesome transformation. It is at this moment that Jack realizes he can’t run from his past, and quickly discovers the true purpose of his inner rage. (Source)

Avery Allan Ludlow (Brian Cox), a Korean War vet with a tragic past, lives alone in a small town, where he runs the local hardware store. Av’s only companion is a 14 year-old ginger-haired dog, aptly named Red by Av’s late wife. One day, Av and Red are enjoying a placid outing at their favorite fishing spot when three boys and a shotgun come along. In an instant, Av’s lifelong friend is gone, the victim of a cruel, senseless act. Devastated, Av determines to find out who the boys are and why they did it. Helped by a local reporter (Dickens), Av tries to expose the truth, but his efforts are ignored by authorities and mocked by the teenagers. The boys’ parents, a rich local businessman (Sizemore) and, across town, a hardscrabble laborer (Englund) and his wife (Plummer), are just as determined to keep Av down. But, faithful to the memory of his best friend, Av single-mindedly presses for justice-with or without the law on his side. (Source)