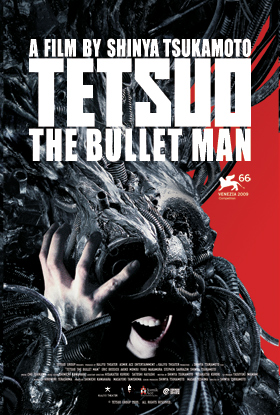 The third installment in the series, TETSUO III: THE BULLET MAN, and Tsukamoto’s first English-language film, stars Eric Bossick as Anthony, a young man who was born and raised in Tokyo and is now raising a family there. What should be a happy time in Anthony’s life is not: his wife is crippled by anxiety and unable to leave the house. She also has recurring nightmares about a horrible fate awaiting the pair’s young son, Tom. Those nightmares turn out to be prophetic when Tom is cruelly run down in the street. Losing their boy pushes Yuriko over the edge and triggers violent emotions in Anthony, whose body begins to transform. Anthony flies into a terrible rage, and soon discovers that the power of his emotion transforms him into a strange, metallic monster. When the driver who killed Tom reappears and Anthony learns the truth about his father’s past experiments on human guinea pigs and about his mother’s death, Anthony mutates into a mass of metal – a human weapon fueled by an uncontrollable rage. This delights the mysterious man who ran down Anthony’s son, a man who now continually taunts Anthony from a distance. (Source)