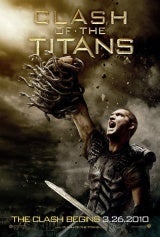 A remake of the 1981 film based on the myth of Perseus. In Clash of the Titans, the ultimate struggle for power pits men against kings and kings against gods. But the war between the gods themselves could destroy the world. Born of a god but raised as a man, Perseus (Sam Worthington) is helpless to save his family from Hades (Ralph Fiennes), vengeful god of the underworld. With nothing left to lose, Perseus volunteers to lead a dangerous mission to defeat Hades before he can seize power from Zeus (Liam Neeson) and unleash hell on earth. Leading a daring band of warriors, Perseus sets off on a perilous journey deep into forbidden worlds. Battling unholy demons and fearsome beasts, he will only survive if he can accept his power as a god, defy his fate and create his own destiny. Leading the international cast is Australian actor Sam Worthington as Perseus, the mortal son of Zeus, king of the gods. Academy Award nominee Liam Neeson takes on the role of the mighty Zeus, and Academy Award nominee Ralph Fiennes plays the role of Hades, god of the underworld, who feeds on human fear. Rounding out the cast is Gemma Arterton as Io, Perseus’ mysterious spiritual guide throughout his journey; Mads Mikkelsen as Draco, who takes up his sword to join Perseus’ quest; Jason Flemyng as Acrisius, a one-time king turned hideous beast; and Alexa Davalos as Andromeda, a princess doomed to lose her life if Perseus does not succeed. (Source)