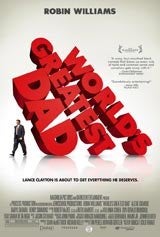 A thoughtful but outrageous comedy from Bobcat Goldthwait, World’s Greatest Dad is a story about a man that learns the things you want most may not be the things that make you happy, and that being lonely is not necessarily the same as being alone.

Robin Williams stars as Lance Clayton, a man who has learned to settle. He dreamed of being a rich and famous writer, but has only managed to make it as a high school poetry teacher. His only son Kyle (Daryl Sabara) is an insufferable jackass who won’t give his father the time of day. He is dating Claire (Alexie Gilmore), the school’s adorable art teacher, but she doesn’t want to get serious — or even acknowledge publicly that they are dating.

Then, in the wake of a freak accident, Lance suffers the worst tragedy and greatest opportunity of his life. He is suddenly faced with the possibility of all the fame, fortune and popularity he ever dreamed of, if he can only live with the knowledge of how he got there.