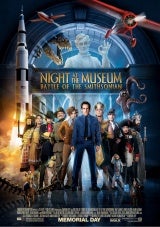 It’s a new “Night” and “Museum” for Ben Stiller, who is joined by several other stars from the original film, as well as new characters from history — including Amy Adams as famed aviatrix Amelia Earhart, Hank Azaria as villainous Egyptian pharaoh Kahmunrah, Christopher Guest as Russian tyrant Ivan the Terrible and Alain Chabat as Napoleon. Owen Wilson is back as cowboy Jedediah, and Robin Williams again rides into history as Teddy Roosevelt. The centerpiece of the film will be bringing to life the Smithsonian Institution, which houses the world’s largest museum complex with more than 136 million items in its collections, ranging from the plane Amelia Earhart flew on her nonstop solo flight across the Atlantic and Al Capone’s rap sheet and mug shot to Dorothy’s ruby red slippers and Archie Bunker’s lounge chair. No major film has ever shot inside the Smithsonian in Washington…until Night at the Museum: Battle of the Smithsonian. The “Battle” begins in theaters everywhere May 22. (Source)

1 thought on “Night at the Museum: Battle of the Smithsonian (Darth Vader Reveal Trailer)”