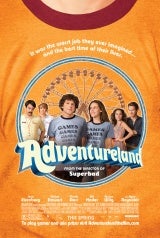 It’s the summer of 1987 and James Brennan (Jesse Eisenberg), an uptight recent college grad, can’t wait to embark on his dream tour of Europe. But when his parents (Wendie Malick and Jack Gilpin) announce they can no longer subsidize his trip, James has little choice but to take a lowly job at a local amusement park. Forget about German beer, world-famous museums and cute French girls – James’ summer will now be populated by belligerent dads, stuffed pandas, and screaming kids high on cotton candy. Lucky for James, what should have been his worst summer ever turns into quite an adventure as he discovers love in the most unlikely place with his captivating co-worker Em (Kristen Stewart), and learns to loosen up.