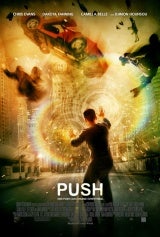 A riveting action-thriller, Push burrows deep into the deadly world of psychic espionage where artificially enhanced paranormal operatives have the ability to move objects with their minds, see the future, create new realities and kill without ever touching their victims. Against this setting, a young man and a teenage girl take on a clandestine agency in a race against time that will determine the future of civilization. The Division, a shadowy government agency, is genetically transforming citizens into an army of psychic warriors—and brutally disposing of those unwilling to participate. Nick Gant (Chris Evans), a second-generation telekinetic or “mover,” has been in hiding since the Division murdered his father more than a decade earlier. He has found sanctuary in densely populated Hong Kong — the last safe place on earth for fugitive psychics like him — but only if he can keep his gift a secret. Nick is forced out of hiding when Cassie Holmes (Dakota Fanning), a 13-year-old clairvoyant or “watcher,” seeks his help in finding Kira, (Camilla Belle), an escaped “pusher” who may hold the key to ending the Division’s program. Pushers possess the most dangerous of all psychic powers: the ability to influence others’ actions by implanting thoughts in their minds. But Cassie’s presence soon attracts the attention of the Division’s human bloodhounds, forcing Nick and Cassie to flee for their lives. With the help of a team of rogue psychics, the unlikely duo traverses the seedy underbelly of the city, trying to stay one step ahead of the authorities as they search for Kira. But they find themselves square in the crosshairs of Division Agent Henry Carver (Djimon Hounsou), a pusher who will stop at nothing to keep them from achieving their goal. (Source)