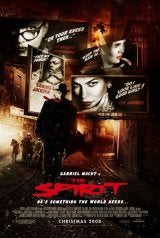 Adapted from the legendary graphic novels, Will Eisner’s The Spirit is a classic action-adventure-romance told by genre-twister Frank Miller (creator of 300 and Sin City). It is the story of a former rookie-cop who returns mysteriously from the dead as The Spirit (Gabriel Macht) to fight crime from the shadows of Central City. His arch-enemy, The Octopus (Samuel L. Jackson) has a different mission: he’s going to wipe out Spirit’s beloved city as he pursues his own version of immortality. The Spirit tracks this cold-hearted killer from Central City’s rundown warehouses, to the damp catacombs, to the windswept waterfront … all the while facing a bevy of beautiful women who either want to seduce, love or kill our masked crusader. Surrounding him at every turn are Ellen Dolan (Sarah Paulson), the whip-smart girl-next-door; Sand Saref (Eva Mendes), the jewel thief with dangerous curves; Silken Floss (Scarlett Johansson), a punk secretary and frigid vixen; Plaster of Paris (Paz Vega), a murderous French nightclub dancer; Lorelei (Jaime King), a phantom siren; and Morgenstern (Stana Katic), a sexy young cop. In the vein of Batman Begins and Sin City, The Spirit takes us on a sinister, gut-wrenching ride with a hero who is born, murdered and born again. (Source)