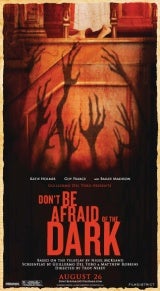 Guillermo del Toro presents DON’T BE AFRAID OF THE DARK, a horror film starring Katie Holmes, Guy Pearce and Bailee Madison, directed by Troy Nixey. Based on the 1973 telefilm that del Toro believes is the scariest TV production ever made, the story follows Sally (Madison), a young girl who moves to Rhode Island to live with her father (Pearce) and his new girlfriend (Holmes) in the 19th-century mansion they are restoring. While exploring the house, Sally starts to hear voices coming from creatures in the basement whose hidden agenda is to claim her as one of their own. Akin to del Toro’s PAN’S LABYRINTH, DON’T BE AFRAID OF THE DARK focuses on a young girl’s struggle against menacing and terrifying forces. (Source)